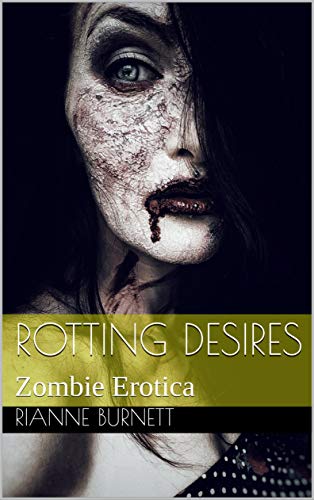 Sex and gore both have a base carnality to them that reminds us we’re made of meat. Rianne Burnett’s zombie erotica “Rotting Desires” doesn’t hold back from exploring that:

With furtive glances around her empty floor, she pressed the elevator call button. Three people were writhing in the elevator of her apartment complex. On closer inspection, she saw two men and a woman. They might have been tenants in her building but their mauled faces made it hard to tell. Their skin was as ashen as the man who had attacked her earlier.

The whole scene was revealed as the elevator doors slowly slid open. The woman was on her back and jerking spasmodically because there was a man at each end of her yielding body. The first was using his left hand to raise her hips so he could plunge his free fist into her core and his manhood into her anus with equal vigour.

His knees moved rhythmically in a growing pool of blood, which was dotted with flecks of skin and shards of bone. The other zombie was pile-driving himself into what was left of her mouth. His arms bulged with the pressure of supporting his considerable weight. With each thrust, he pushed the woman’s upper and lower jaws further apart.

Thankfully, the doors closed as the man at the bottom end tore a chunk out of the woman’s thigh. Samantha ran back to her apartment and emptied her stomach’s content into the toilet.

Horror and erotica overlap in many ways. The shock of seeing carnage mirrors the fixation of watching pornography, both stirring recognition within us even if there are moments of repulsion. I love how “Rotting Desires” goes hard into that overlap.

The narrative itself is solid: A flu is ravaging Kingston, Jamaica, turning much of the population into zombies. Burnett paces the slow descent into chaos well. The events of the story are inextricable from the setting; the cadence of Jamaican English comes through strongly in the characters’ spoken lines. A sly undercurrent of political commentary runs parallel to the surface story. Published in February 2020, this piece anticipates governmental responses to the COVID-19 pandemic.

Whether or not the piece is arousing is secondary to the emotional resonance it provokes. Erotica is a form of literature that captures the desires of our cultural moment. Those desires are in turn shaped by our lived experiences and ideologies. Centering Jamaican characters and resisting the White gaze, “Rotting Desires” is a fantastic example of erotica that is conscious of the society it draws from.